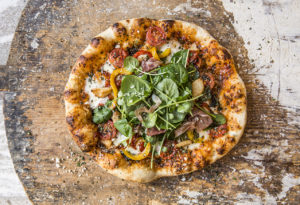 August might be a sleepy time for restaurants, but it’s the most exciting time of year for local foodies: Houston Restaurant Weeks rolls through town with bargain prix fixe menus.

More than 250 area restaurants will participate in this year’s culinary extravaganza, a fundraiser for the Houston Food Bank. Last year the month-long event raised $2,015,157, making it the largest fundraiser of its kind in the country benefiting the country’s largest food bank. Founded in 2003 by food writer Cleverley Stone, the volunteer effort has raised more than $9.6 million, an amount that translates into nearly 29 million meals for the area’s food insecure.

For those who enjoy dining out, HRW — which runs Aug. 1 through Sept. 4 — is a delicious way to sample some of the city’s newest and most popular restaurants for a set price. Newcomers to the event this year include Coltivare, Xochi, Potente, Osso & Kristalla, Common Bond, Eloise Nichols Grill & Liquors, Izakaya, Brasserie du Parc, Le Colonial and Chez Nous in Humble. They join a strong contingent of returning restautants such as Pappas Bros. Steakhouse, Brennan’s of Houston, Café Annie, Churrascos, Del Frisco’s, Damian’s Cucina Italiana, El Tiempo Cantina, Rainbow Lodge, Ragin’ Cajun, Vic and Anthony’s and Tony’s.

There are even restaurants offering “experiences” in addition to dining. The General Public in CityCentre is including a gift card for bowling at next door Bowl & Barrel as part of its $35 dinner; at Main Course Cooking School in Spring guests get to prepare dinner then eat it. Lunch at Alamo Drafthouse Cinema in Katy comes with a free movie ticket to be used at a later date.

Dinners are in two price categories: $45 ($7 donated to Houston Food Bank), and $35 ($5 donation). Lunches are $20 and brunch is $22 ($3 donations). Stone said there are surprises sprinkled throughout the HRW menus, which can be found online at houstonrestaurantweeks.com.

Make your culinary plan of attack in advance. Most restaurants accept reservations, but all welcome walk-ins unless specifically noted.