n this week’s episode of “What’s Eric Eating,” chef Danny Trace joins CultureMap food editor Eric Sandler to discuss his new role overseeing both Potente and Osso & Kristalla, the fine dining and casual Italian restaurants from Astros owner Jim Crane and Reef partner Bill Floyd. After opening quietly shortly before the Super Bowl, the two establishments have garnered more attention thanks to both their proximity to Minute Maid Park and the food Trace is serving.

Trace discusses the food he’s serving at Potente as an Italian-style evolution of the Creole food he became known for during his long stint as the executive chef at Brennan’s of Houston.

“To me, I’m continuing to do the same things I’ve done and put my stamp on and am known for,” Trace says. “I’m using seasonal products. I’m using all the same purveyors and farmers and fishermen. It’s just more Italian-influened, which, Creole and Italian go hand-in-hand. It’s kind of easy for me.”

Trace also discusses what its been like to be in the middle of the World Series crowds, how he feels about working for Jim Crane, and what he’s done to make Osso & Kristalla appealing to diners. 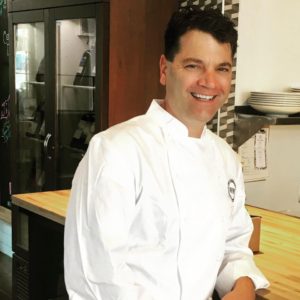 Trace will head the culinary operations at Potente and Osso & Kristalla, both located at 1515 Texas Avenue, near Minute Maid Park, where the American League West-leading Houston Astros play.

Trace replaces executive chef Michael Parker, who will continue to oversee Crane’s culinary operations in Florida. Parker was instrumental in hiring Trace, according to a press release about the change.

Trace left Brennan’s in late March after working for the Brennan family for 20 years, first at Commander’s Palace and then in Houston when the iconic restaurant reopened in 2010 after being damaged during Hurricane Ike.

Trace said he learned about cooking from his Italian grandmother and Cajun grandfather while growing up in Louisiana. “From étouffée to grand bowls of pasta, the marriage of these traditional dishes and family experiences is the very reason I am a chef. I look forward to returning to my Italian roots at Potente and Osso & Kristalla,” Trace said in the release.

A new chef is leading the kitchens at Potente and Osso & Kristalla in downtown Houston.

Danny Trace, former executive chef at Brennan’s of Houston, has taken over as executive chef at the Italian restaurants, according to a press release. Earlier this year, Houston Astros owner Jim Crane opened the restaurants at 1515 Texas Ave., on the ground floor of The Finger Cos.’ new 500 Crawford apartment complex across from Minute Maid Park.

“I am excited to have Chef Trace in Houston to oversee the culinary operations at Potente and Osso & Kristalla,” Parker said in the release. “A remarkably talented chef, I know that he will embrace and elevate what we have created at both concepts.”

Bryan Caswell was originally attached to the concepts, but he mutually split with Crane and the eateries in November to pursue new projects with his company, Bryan Caswell Concepts. Bill Floyd remains general manager for both restaurants.

Trace left his position as executive chef of Brennan’s on March 31. He had worked in Brennan-family restaurants for two decades and was hired to his latest position in 2009.

Growing up in Louisiana, Trace learned about cooking from his Italian grandmother and Cajun grandfather.

“The most memorable meals for me are of my grandparents in the kitchen. My grandmother’s family was from Milan and Naples and my grandfather was from Thibodaux, Louisiana,” Trace said in the release. “From étouffée to grand bowls of pasta, the marriage of these traditional dishes and family experiences is the very reason I am a chef. I look forward to returning to my Italian roots at Potente and Osso & Kristalla.”